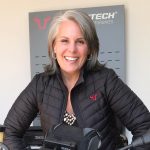 Sarah is an avid street and off-road rider who has more than two decades in the motorcycle industry under her belt. She originally got into the motorcycle field as an MSF RiderCoach and continued her career, working with several industry companies, including Hein Gericke, Schuberth, the American Motorcyclist Association, the International Motorcycle Shows, and BMW Motorrad before landing in her current spot heading SW-MOTECH USA. Sarah’s industry involvement includes being the first woman elected to the Motorcycle Industry Council (MIC) Board, the FIM Commission on Women in Motorcycling. She has received numerous leadership awards including "Powersports Industry Leader" by Powersports Business, one of the "50 Makers of Motorcycling" by Bonnier, and a "Top 100 Leaders in Powersports" by Dealernews.