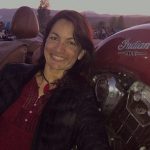 Indy Saini is a filmmaker and motorcycle rider passionate about adventure and travel, driven to increase the complex stories of women in mass media. Her short film directorial debut "The Lesson,” garnered international awards including Best US Narrative at the Women’s International Film Festival in Miami. Indy’s many years behind the camera has landed her work with master storytellers including Ang Lee and David Lynch on major Hollywood movies such as “Harriet,” “Gemini Man,” and “A Wrinkle In Time.” Her documentary work as cinematographer includes: “Soma Girls,” about education the children of sex workers in India that aired on PBS; "Women in the Front Seat,” and “Ice Bear,” a National Geographic Wild film for which she received an Emmy Nomination.