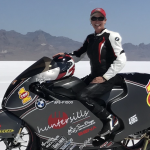 Erin Sills is a 45-time land speed motorcycle record holder, industry spokesperson, and retired Facebook executive. She owns Hunter Sills Racing which races 1000cc BMW motorcycles on the Bonneville Salt. Erin and her team hold more records in the 1000cc class than any other, including the coveted 1000cc Production record at 207 mph, the top naturally aspirated mile record at 238.389 mph, and a top speed to-date of 242mph. Erin is co-chairwoman of the largest US website for female motorcycle enthusiasts, WomenRidersNow.com, and has been named the American Motorcyclist Association Female Athlete of the Year͟ for her motorcycling accomplishments and the American Marketing Association’s Woman to Watch͟ for her business accomplishments. Erin most recently served as a Global Director of Marketing at Facebook. She and her race team have set two Guinness Book World Records, and Erin a member of the Bonneville 200 MPH Club, the El Mirage 200 MPH Club, the BUB 201 MPH Club, and the Mojave 200 MPH Club. Erin currently serves on the AMA Specialist Sport Commission, the FIM Women in Sport Commission and the board of the AMA Heritage Foundation. She is also an off-road adventure riding coach and in 2014 was named University of Cincinnati, College of Business alumni of the year. Amidst all that … Erin enjoys most her advocacy for women in the sport of motorcycling.